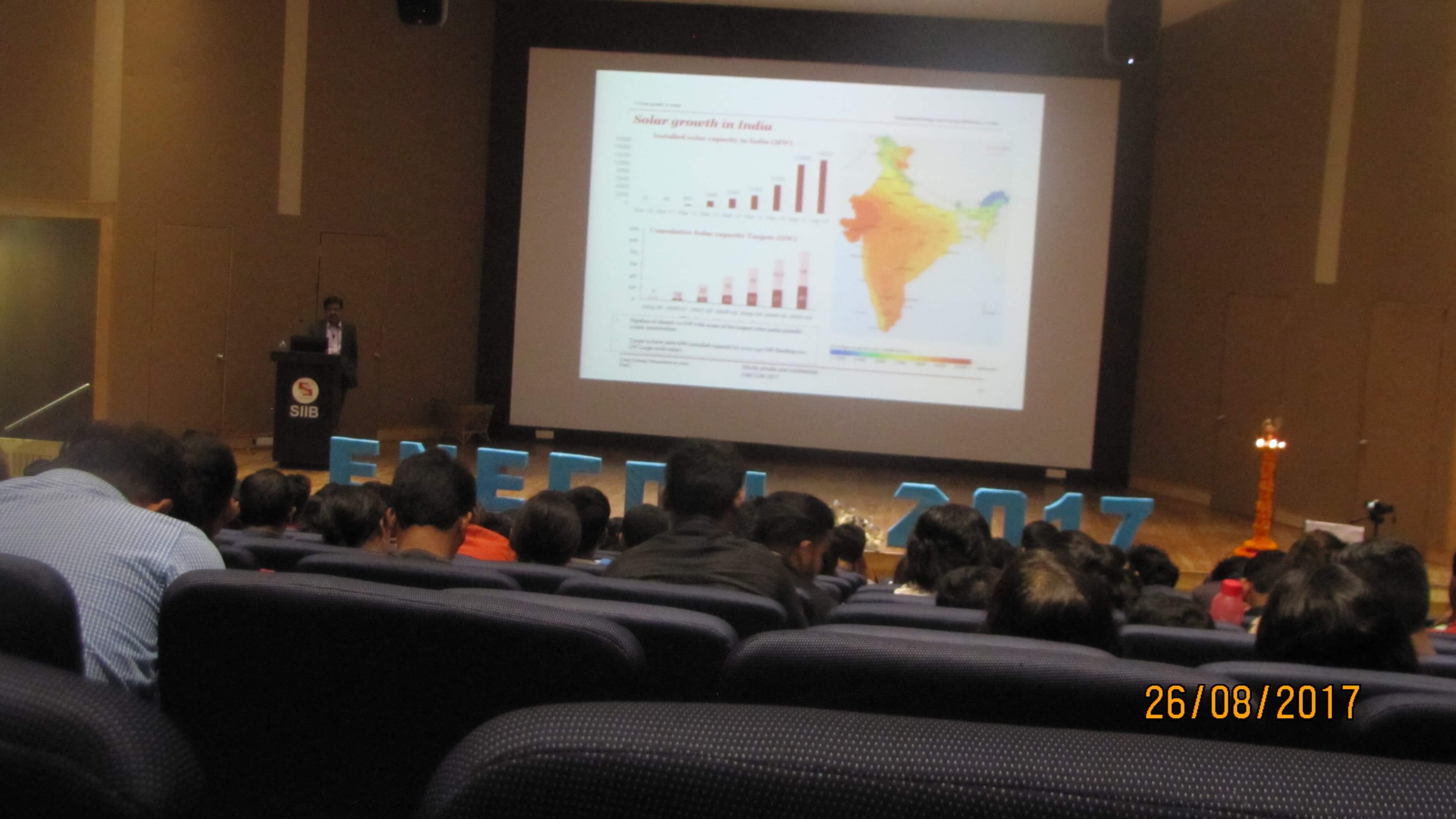 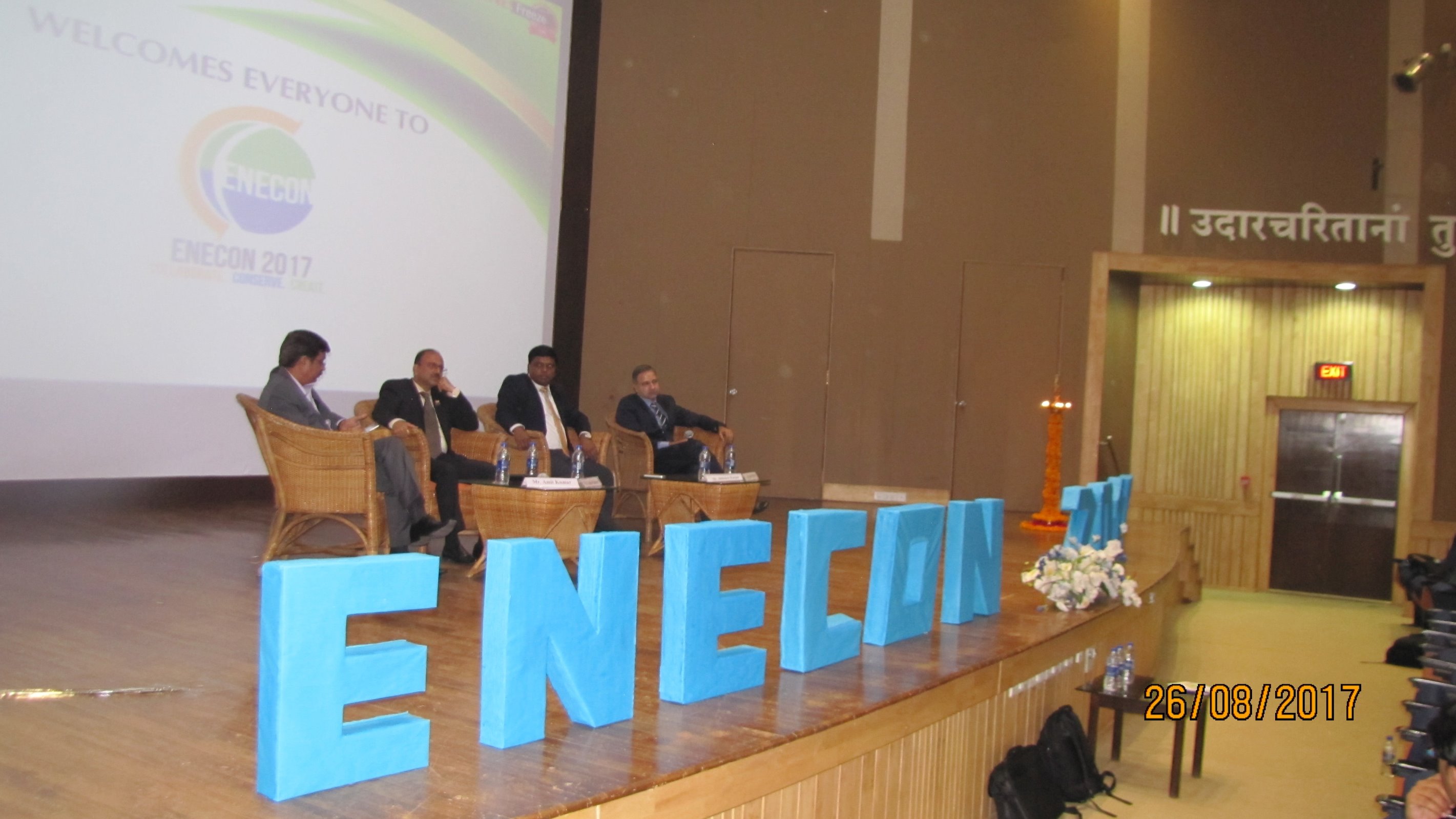 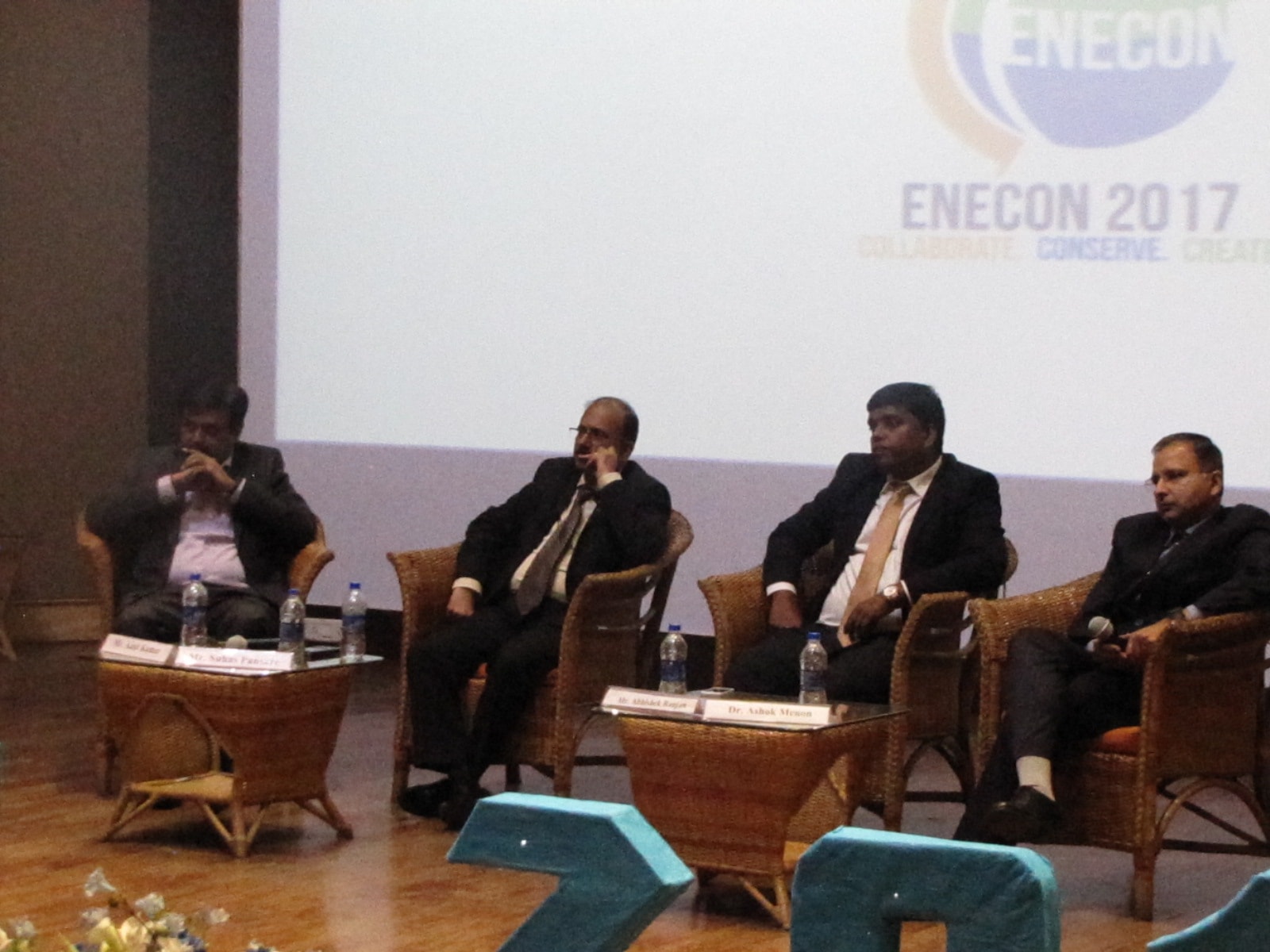 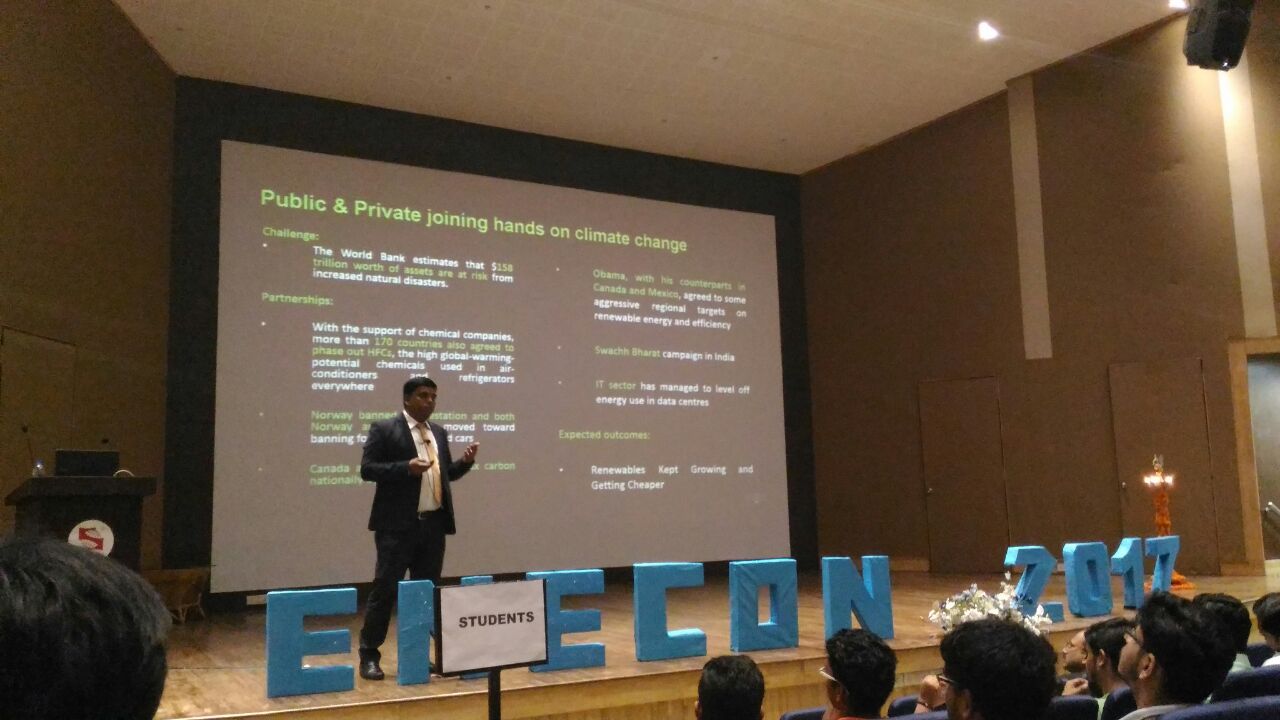 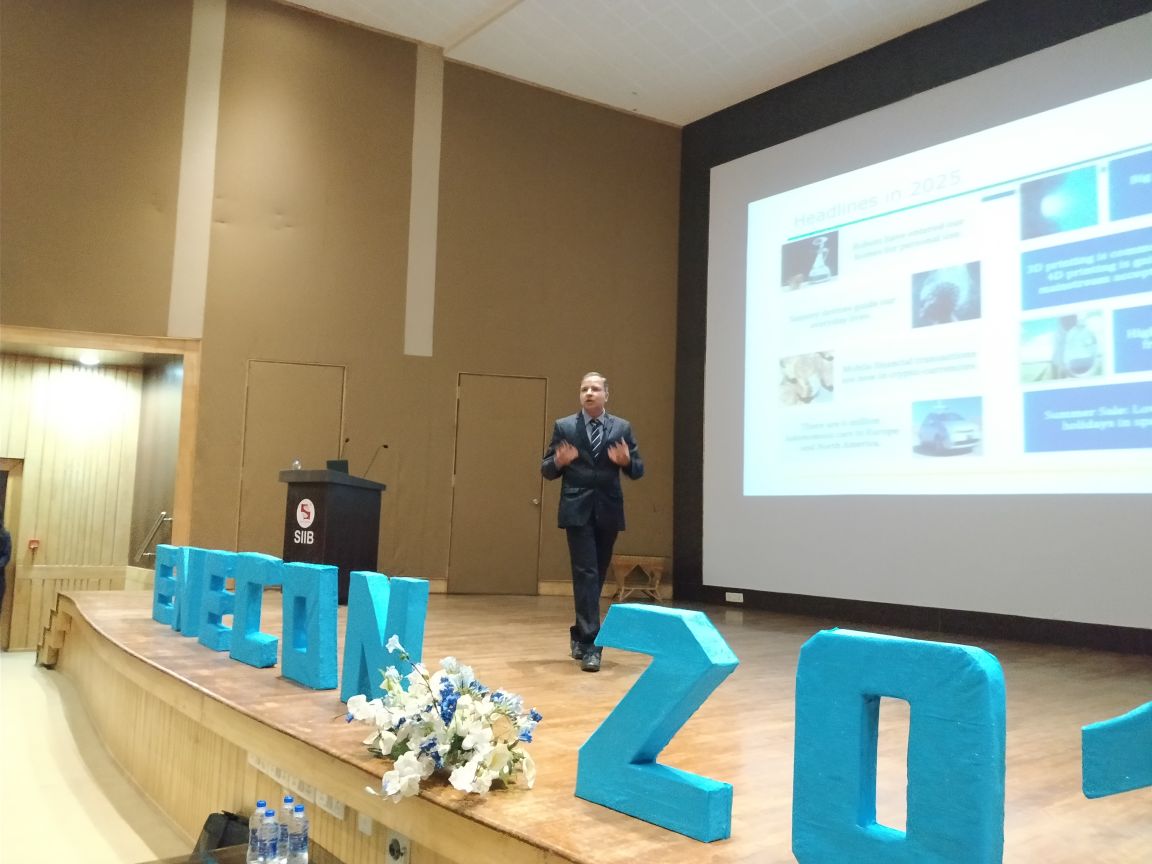 ENECON, the flagship event of MBA Energy and Environment, saw the conclusion of another successful chapter on Saturday 26th August, 2017. The theme for the conclave this year was ‘Collaborate Conserve Create’. Building on last year’s concept of “Green in charge of Change”, SIIB took an initiative and included topics like Circular Economy, Financing the renewable revolution and building a culture of sustainability to the mainstream. The conclave saw a huge participation from industry experts as well as students and faculty across various colleges in Pune.

Dr. Ashok Menon shared his views on “LCA Science of making informed choices to enable Circular Economy”. He introduced the concept of Circular Economy model that is restorative and regenerative in nature. He explained how sustainability has become the base of upcoming mega trends. Sustainability according him should be integrated with the system. He stressed on the fact that how Circular Economy opens up new avenues of revenue generation in the near future and takes us away from the linear approach of take- make- dispose, that is generally followed. Realizing the impacts of linear economy Dr. Menon mentioned if we can quantify anything we can improve it. LCA can be used as a tool for circular economy to bring out a revolution or a paradigm shift.

Mr. Suhas Pansare shared his views on financing the solar rooftops. He indicated that the world energy requirement is 15TW, a fraction of Sun’s radiation 162000TW. He mentioned that 100 million dollars would be required for the solar sector growth in India. He touched upon various financing methods such as CAPEX and OPEX. He also mentioned that PSU/ Private Banks are asked to lend for solar projects on priority basis. He said that the areas of concern that are the obstacles of growth are severe and immature competition and changes in regulations. He concluded by his words, “Generate power while the sun shines!”

Mr. Amit Kumar started off mentioning “Efficiency is the new elephant in the room.” He spoke on the topic of ‘Clean Energy perspective in India’. He elaborated various facts related to renewable energy sector and how 100 GW solar targets was fixed and was fixed in 2014. He explained how achieving 40 GW of solar rooftop is not feasible, with the main hindrance coming in from DISCOMs. Despite UDAY scheme announced by GoI, solar tariffs will go up in next round, otherwise power sector will not be able to sustain. Also, mentioning about energy efficiency, how EESL has become a role model for many developing as well as developed countries.

The participants had a good response towards the conclave as was evident from the engaging Q&A session with the industry stalwarts. Summing it all up in his vote of thanks Dr. Ravi Sharma, the convener of ENECON 2017 explained how the audience was inspired to think optimistically towards the issue of sustainability and use of clean energy. Dr Ravi Sharma concluded the event by promising to make a comeback of the event with a thought provoking theme for next year.